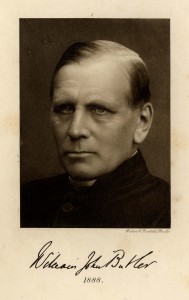 William John Butler, pictured left, has his name carved in the top left corner of the Gateway.  Admitted first to Grant’s House in 1830 he became a King’s Scholar in 1832 and rowed against Eton on 12 May 1836.  He was elected to Trinity College Cambridge the same year and embarked on a career in the church.  Eventually rising to the role of Dean of Lincoln in 1885, Butler continued to take a great interest in his old school.  He served as a Busby Trustee from 25 May 1889 and preached a sermon on ‘Westminster School: its Past and its Future’ at Commemoration in 1890 ending ‘Thus may we look for God’s blessing upon the School which we love; thus may we cherish a reasonable hope that a noble future lies before her’.